In consequence of the carriage of letters by travel¬lers in large numbers, infringing the post office monopoly, and causing loss of postal revenue, the authorities created a special postal contraband service. These contraband letters were taxed at double rates of postage, and half of the fees collected thereon was supposed to be given to any informer. The Turkish word for contraband is Katchak, and this special organisation was known as the Katchak Post. 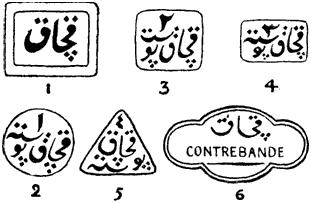 At first the tax was denoted by ordinary postage stamps affixed to the letters and obliterated with a hand-stamp showing the word Katchak in a double-lined rectangular frame, as illustrated (type I). I have an inland cover with this mark applied in black on a stamp of the 1869 issue. This first mark of the Katchak Post is very scarce.

Following the special obliterations above described, the postage on contraband letters was denoted by ordinary postage stamps, overprinted in advance with a special mark, consisting of the words Katchak Post and a number. There were four types of this mark, No. 1 in a circle, Nos. 2 and 3 in rectangles, and No. 4 in a triangle (these are types 2, 3, 4 and 5 in our illustrations.—Ed. "P.M.")

These number 1 to 4 denoted the different inspectors or divisions of the service, and served also for control purposes. The stamps were not supposed to receive any further obliteration after being affixed to the letters, but in used state they may be found showing parts of ordinary postal obliterations also.

These Katchak Post overprints may be found on the issues of 1869 to 1888. When the operations of this post ceased, there remained on hand large stocks of the 1876 to 1884 issues bearing the overprints, and these were sold off as remainders, in consequence of which they are common in unused condition, while genuinely used and showing parts of other genuine obliterations they are scarce.

There was a further special obliteration in use at a later date, consisting of the Turkish word, with its French equivalent of "Contrebande" beneath it, in a fancy rounded double-lined frame. I have this obliteration on the 1892 issue (illustration No. 6).

It will be seen that these stamps actually denote postage due, and they are therefore just as collectable as any postage due stamps, and collectors of Turkish stamps cannot well ignore them.