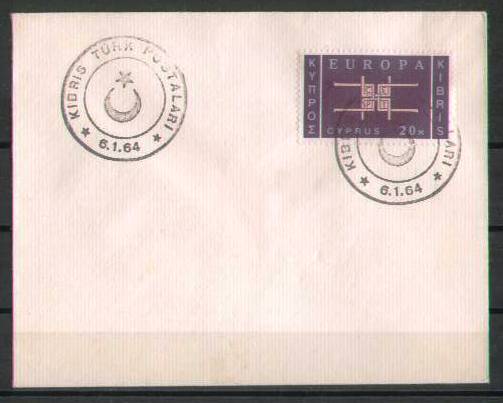 With the commencement of intercommunal disturbances on the 21st December 1963, Turkish Cypriots were deprived of postal services.When all efforts of the United Nations Peace Keeping Force for the restoration of postal services to the Turkish Community did not produce any result, the Turkish Cypriot side introduced a handstamp on 6 January 1964, bearing a fixed date (6.1.64) and a star crescent, with the inscription "KIBRIS TURK POSTALARI" (CYPRUS TURKISH POSTAL SERVICES) on it, and started cancelling "Republic of Cyprus" stamps with this handstamps.

(This was first step in the establishment of the TURKISH CYPRIOT POSTAL ADMINISTRATION).